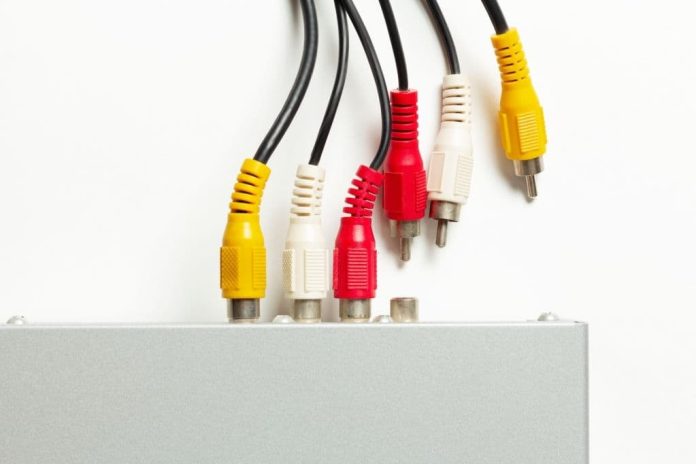 The RCA jack or phono connector is widespread despite its poor design, this article describes how to solder it and the color codes for common signal types.

The RCA Jack is also known as phono plug or sometimes cinch connector. It has become ubiquitous not because of the excellence of its design, but because it is cheap, easy to mass-produce and takes up very little space on the back panel of a piece of equipment.

How to Solder A Phono Plug to Audio Cable

Choose screened audio cable, and note that phono plugs cannot usually accommodate thick audio cables of more than 4mm outside diameter without butchering the strain relief of the cable shell. The cable retaining claw in the plug is often only good for a smaller diameter of about 2-3mm, so it is best to select screened cable of 2-3mm diameter for most phono plugs.

Before wiring the plug, it is a good idea to insert the metal part into a suitable RCA socket in a clamp, and slide the plug shell and strain relief coil onto the cable first. The temptation to use the socket on a piece of equipment should be resisted.

The reason to mate the plug with a socket is that the insulation holding the pin is a soft thermoplastic, and if a lot of heat is needed to tin the center pin this softens and the pin ends up skewed relative to the ground connection, making the plug a bad fit. This can still soften when using the socket, but now the socket will keep the parts concentric.

The center pin of the plug is usually hollow, and it is necessary to solder the center conductor of the screened cable to this. Particularly with nickel-plated plugs, this needs a lot of heat, so tin the center pin first. The amount of outer jacket that has to be removed can be measured, allowing for about 5mm of the inner conductor to go into the pin.

The outer jacket should be gripped by the claw, so the shield braid needs to be twisted together to form a pigtail which can be formed around the outside of the ground connector with a pair of needle-nosed pliers. When this is soldered, the excess can be trimmed off.

Next, the center conductor needs to be stripped back a little, allowing for the creep-back of the insulation when the wire is heated, and soldered to the pre-tinned inner pin. When the parts have cooled down enough to touch the cable clamp can be formed around the cable sheath and the plug shell brought back and screwed to the plug, which is then removed from the socket used to keep it together during soldering.

Problems With the RCA Phono Connector

The main charge leveled against the RCA plug is that unlike nearly all other audio connectors it makes the central signal connector before the shield ground contact.

Many a rookie audiophile will have discovered this to their dismay when greeted by a loud buzz as they find the right socket on their amplifier, which obliges by amplifying the AC house current leaking across the transformer winding capacitance and scaring them out of their wits. The buzz goes away when the shield contact mates a split second later establishing a common ground reference.

Phono plugs and jacks only carry a single signal so many are needed, compared with multipole connectors like the DIN plug or HDMI connector. The following color codes are used some common signals:

Because of its ubiquity, before considering wiring them it is worth considering if the time and effort is worth it compared to getting a pre-made lead. The world is flooded with cheap and nasty Chinese RCA interconnect cables, and if one is needed for an uncritical application like interfacing some computer speakers it is probably best to just buy one.

If a RCA cable is needed for a hi-fi system, however, then it is worth getting something of a known quality or assembling it. Many of the cheaper cables do not even use screened cable, going on the principle it isn’t necessary for a 1.5m run at line level signal levels and impedances. While this is true in most cases, it leaves the system open to hum and interference from things like mobile phones.