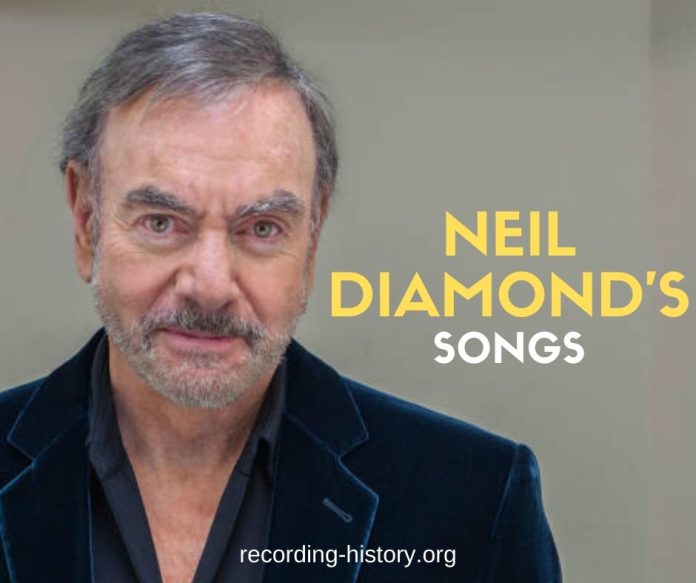 We all know and love this amazing musician by many hits like “Sweet Caroline,” “Girl, You’ll Be A Woman Soon,” and “Solitary Man.” Born in 41′ this golden man started writing songs when he was a student at New York University. He was pre-med, but he followed his love for music. Eventually dropped out in college and dropped in on our hearts.

This song was Neil’s second, number one hit in ’74. It climbed up all the way to number five on Billboard’s Hot 100.

The heartlight is actually the glowing heart of E.T. when he flies. This song was inspired by the sincere movie E.T.

This song was released on the Moods album in ’72. This song is simply put “ beautiful “. It is so beautiful It’s hard to describe. It took 11th place on the Billboard Hot 100 of  that year.

This song is not literal because Neil doesn’t wear jeans that often. But this nice tune was once featured in Gat T.V. advertisement.

This song was written by Diamond for the film, which he starred in, “The Jazz Singer.” The movie was a fail at the box office and shot down by critics, yet the soundtrack was a success and went up to number three on charts.

This song was inspired by the one and only Mozart’s “Concerto number 21” for piano. One might say It is the most energetic track inspired by Mozart.

This classic N.D. hit makes It into our number 4. It was his first-ever single. It was recorded in ’66 and issued before his album “The Feel of Neil Diamond,” which makes it into the racks of music stores.

This lovely song was Diamond’s first number 1 single. It was in the album “Tap Root Manuscript” which was released in ’70.

We all know this one from the scene in the movie “Pulp Fiction” where John Travolta enters the house Uma Thruman for the second time to drop her back where she overdoses on heroin. It was released with the album “Just For You” in ’67.

This is most people’s favorite song by Neil Diamond. It was a song that shaped a generation and formed pop culture on a core level. And the number one goes to “Sweet Caroline.”