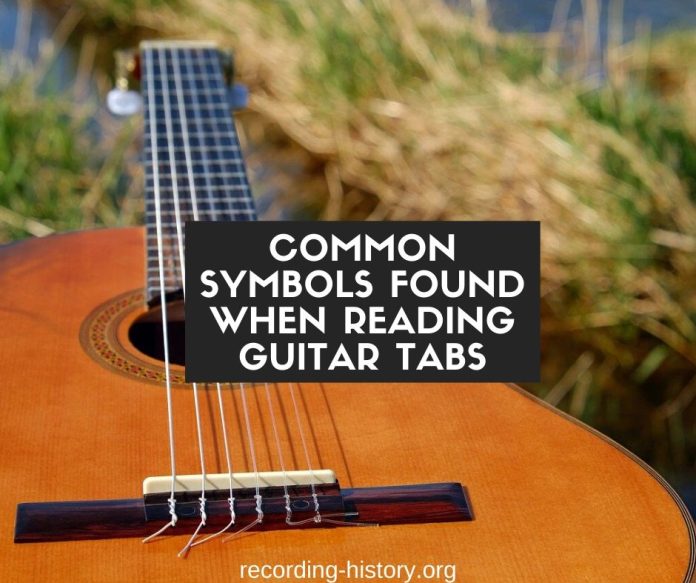 There are several techniques specific to playing guitar and other string instruments. These are commonly noted in guitar tabs by capital letters along the staff depicting a guitar’s six strings. Below is a list of the letters used along with a brief description of the technique.

Capital H designates a hammer on in guitar tab. Guitarists achieve a hammer-on by plucking a string then forcefully pressing a different fret along that string to raise or lower the note’s pitch.

The two numbers right beside each other above the capital H indicate the two notes of the hammer-on. A 0-3 on the third from the bottom line of the staff, for example, would tell a guitar player to pluck an open D string then quickly press that string on the third fret.

A capital P designates a pull off. Guitarists achieve this by plucking a string which is being pressed by one of the fingers of the left hand then quickly pulling that finger off the fret to lower the note’s pitch. The two numbers right beside each other above the capital P indicate the two notes of the pull off.

An 8-6 on the third line from the bottom of the staff, for example, would tell a guitar player to press the eighth fret of the D string, pluck the string, then quickly pull off with another finger of the left hand ready on the sixth fret.

If a guitarist is supposed to slide a fretting finger either up or down the neck to play a smooth series of notes in one rapid motion this will either be indicated in tab with a capital S or / and \. The slashes are helpful in that they provide a visual depiction of whether the slide is up or down the guitar’s neck.

The directions 3S5\3 or 3S5S3 indicates musicians should press the third fret, slide up to the fifth, then back down to the third. When it is unimportant where a slide begins, a number indicating a starting fret may be omitted.

A letter B in guitar tab indicates that a pitch is bent on a certain string. To bend a pitch, guitarists pluck a note then use their fretting finger to push the string up or down toward one of the neighboring strings. The farther the string is pushed, the higher the pitch becomes since the guitarist is in effect tightening that one string.

The letter R indicates a return to the string’s original pitch. The instructions 3B{5]R3 means the pitch of a string pressed on the third fret should be bent until it sounds as though the fifth fret is pressed then allowed to return to its regular pitch.

Guitarists can achieve a vibrato affect by quickly bending a pitch up and down. This technique is indicated in tab with a capital letter V.

An X over one line indicates that that particular string should not be played with the rest of the chord. Several Xs stacked one on top of another indicate a technique called a slap or string click. To achieve this rhythmic effect guitarists lay their fretting hand over the strings and strum.

A capital T indicates a technique known as tapping, which has some similarities to a hammer-on. In a hammer-on, the right hand strums or plucks a string and then the left hand hammers on a fret. With a tap, the right hand is not involved at all. The left hand strikes the string at the desired fret with enough impact to sound a note.

Now guitarists have all they need to find some tab and start strumming. Musicians interested in learning to read tab may also want to check out the pros and cons of guitar tab as well as some tab basics covering the staff and numbers.