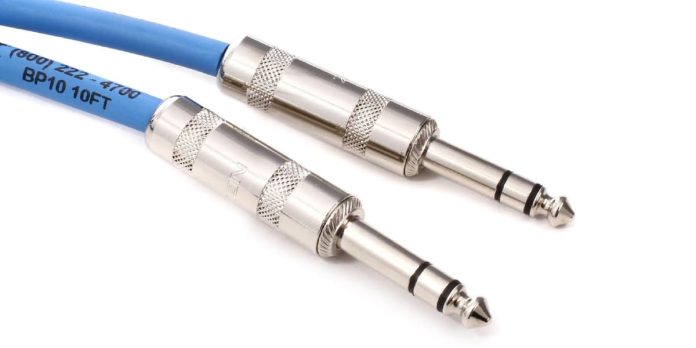 Microphone cables fitted with 3-pin XLR connectors or TRS jacks can be used for stereo signals at a push. Here is how to use a mono mike circuit for stereo.

Sometimes there is an existing microphone circuit from a lectern to a PA system, and it would be nice to be able to temporarily rig an iPod from there to play some tunes through the PA.

First a caveat – the correct way to do this, of course, is for get a tech to run a stereo cable from the podium to the PA. Since the iPod is usually battery operated, ungrounded, and coming in at line level the extra cable can usually be unbalanced for typical cable runs of less than 50m.

It’s worth doing a sound check first before chasing the cable into the wall or otherwise making things permanent. If the cable has to go through a lighting grid or the electrical wiring carries a lot of dimmer or motor currents then it may just be that the stereo signal has to go along two balanced cables and a pair of DI boxes are used at the iPod end to run the cable balanced.

Sometimes needs must. Perhaps the rig is temporary, or it is a small group that just uses the hall one evening a week and the cost of rigging another cable isn’t in the budget. In that case, it is often possible to use the balanced microphone cable as an unbalanced stereo cable.

It is not usually possible is to use the existing mic input – it is expecting a balanced low-level signal in the order of 5mV for a typical dynamic stage mic. Not 500mV or more coming from an iPod at line level!

At the mixer end, with the PA volume faded right down, fade the mic fader right down and take the 3-pin XLR plug out of the microphone socket. Ideally the mixer will have an auxiliary input for unbalanced stereo audio sources via a 1/4 inch stereo jack.

XLR socket to 1/4″ TRS jack adapters are readily available, and can be used to plug the microphone cable into the stereo aux jack. These adapters connect the XLR pins to the jack as follows

This determines what needs to happen at the send end at the podium/iPod. Here it is necessary to wire an XLR plug to a 3.5mm mini jack plug with the same pinout as above.

Plug the mini jack into the iPod, the XLR plug into the free end of the mic cable, set the iPod volume about 3/4 of the way up, play some songs. Fade up the mixer aux input and the iPod should be playing through the PA system.

At this stage it is worth pausing the iPod and listening for annoying buzzes and hum, then repeating the exercise bringing the lights up and down. Unbalanced connections can be problematic with interference – this is an expedient, not a correct, way of doing this job.

Unbalancing the cable makes things sensitive to interference. The iPod is not grounded, which avoids ground loops that can plague unbalanced hookups over long distances. Purists will observe balanced cable is twisted pair overall screened, whereas stereo unbalanced cable is two individually screened pairs. So there may be some crosstalk at higher frequencies leading to poorer stereo imaging. This is a moot point given the sort of quality that will be had for the typical PA driven by an MP3 player.

There are other pitfalls –

These pitfalls can be avoided by informing the tech, and labelling the non-standard configuration. At the end of the session, fade the PA down, unplug the iPod, replace the mic, and run a quick sound check everything is restored to normal operation.

It is possible to use the existing mono microphone wiring for stereo unbalanced working at line level in most cases. This can save a lot of time, disruption and money.