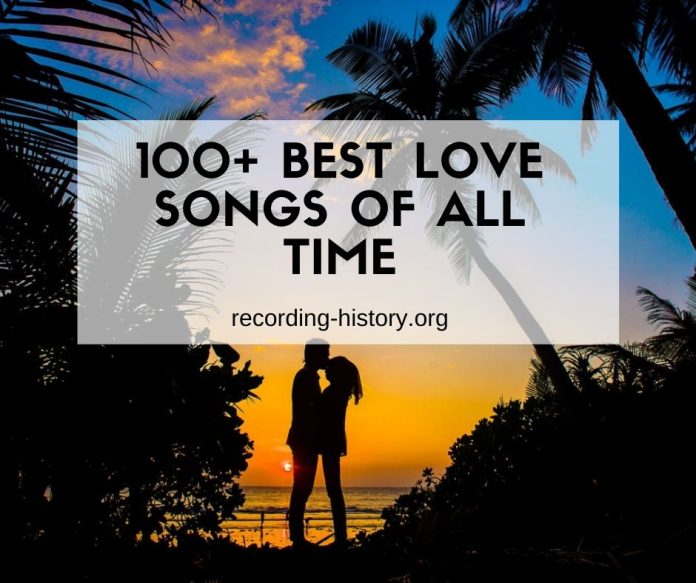 Love songs are as ancient as human life itself and sorry Paul McCartney, but love songs are not silly at all.

As a genre, love songs manifest the type of generation we have and the brand of love that we describe in each of these generations. And speaking of genre, love songs are expressed in almost all music genres such as soul, R&B, pop rock, alternative rock, modern, literally all genres.

Who would ever forget that signature slow, orchestral music with the baritone voice of the Righteous Brothers while Demi Moore and Patrick Swayze have their moment with the clay pot?

This timeless love song first made its hit in 1965 in the album Just Once in My Life but was immortalized through the movie Ghost.

2. I will always love you

This is perhaps one of the most belted out songs since the 90s and up to now. It was originally written by Dolly Parton in 1968 but was however, immortalized by Whitney Houston in 1992 for the film The Bodyguard. It is one of the most covered songs in the world and one of the best-selling singles of all time thanks to its very emotional runs and lyrics.

This song by Sir Elton John won the hearts of many people because of its uncomplicated tone, and simple lyrics especially that it was written in 1970 for his now husband, before the world even knew that he was gay. It was one of the singles included in his best-selling album Take Me to the Pilot which won Sir EJ his Grammy Hall of Fame.

4. The way you look tonight

This song made its debut in 1935 for the film Swing Time and was sung by Fred Astaire and won an Academy Award for Best Original Song in 1936. It would be covered by various artists but Frank Sinatra’s version in 1964 gained the most fame. In 2002, the song was included in the Great American Songbook released by Rod Stewart.

5. How deep is your love

Bee Gees is known for many timeless love songs but this song is one of their super hits. It was first heard in 1977 in the film Saturday Night Fever and stayed in the top 10 hit chart of both the US and UK hit charts for 15 years. It was ranked 22nd in the Billboard’s All Time Top 100 during its 55th anniversary.

It was written by Lionel Richie in 1981 to be the official theme song of Franco Zeffirelli film of the same title. Zeffirelli wanted the song to be a duet and so Diana Ross came in the scene. The song became a major hit and was nominated for an Academy Award for Best Original Song in 1982 and was then covered by famous artists including Luther Vandross and Mariah Carey. The song later on became tagged as the greatest song duet of all time by Billboard.

7. I just called to say I love you

It is Stevie’s biggest hit song which he recorded in 1984. It was originally written as the theme song of the film The Woman In Red but ended up topping the charts of over 19 countries for six months. Aside from that, it also won an Oscar and a Grammy for best original song and gave Stevie his fourth Grammy.

8. When a man loves a woman

The raspy-sweet voice of Percy Sledge in 1966 and of Michael Bolton in 1991  belting out how men change when they love women made this song is one of the most famous love songs ever written. The Sledge version was included in the 500 Greatest Songs of All Time by the Rolling Stones and the Bolton version won Michael a Grammy.

This song by the Scottish duo, The Proclaimers, talks about what a man would do including walking 500 miles back and forth for the woman he loves. It made its hit debut in the UK in 1988 and was on the top spot for eight weeks. It was also number one in Ireland, Australia and New Zealand in 1990 and made its way to the US in 1993 for the film Ben and Jerry. It was re-released in 2000 in the US and Canada.

This iconic song will forever remind us of Jack, Rose and the movie Titanic. It is considered as Celine Dion’s breakthrough power ballad as it became an instant international hit in 1977 in more than 20 countries. It is included in the Greatest Songs of the Century, sold more than 18 million copies and is hailed as the eight overall best-selling single by a female artist.

These love songs can range from jazz soul to blues soul with their signature saxophone and piano instrumentals. Some of the most unforgettable soul music love songs are Let’s Stay Together by Al Green, Let’s Get It On by Marvin Gaye and contemporary songs such as All of Me by John Legend and Make You Feel My Love by Adele.

With those raspy tones, bass guitars and drums, rock love songs give us the feel love too strong or love gone wrong. Famous artists within this genre are Journey, Pink Floyd, Aerosmith, Firehouse and Queen, among others.

Contemporary love songs are a hodge-podge of different genres. At present, they are dominated by pop/alternative rock, upbeat jams with a fusion of soul, jazz and R&B. Famous modern love songs that truly hit the charts are songs by Adele, Ed Sheeran, Maroon 5, John Legend and Mariah Carey, to say the very least.

Love Songs for Him

Professions of love by women never get old and that is a fact. Mostly soul, R&B and jazz, who would forget Adele’s Make You Feel My Live or Katy Perry’s Unconditionally or Etta James’ At Last? With their raw, smooth runs and high vocals, these songs are so timeless.

Love Songs for Her

It really strikes a different feel when love songs are heard from a man’s point of view. Blues-rock singer John Mayer comes right through with songs like A Face to Call Home and Shawn Mendez’s Treat You Better or the classics by Robbie Williams and country songs by Blake Shelton, Eric Stapleton, Eagles, etc.

Love songs are forever because they tell the universal story of all the kinds of love from being loved back to being not, from being chosen to not being, for taking risks and for being afraid to jump on the love train. There are sub-genres under love songs and that makes it all the more versatile and relatable.