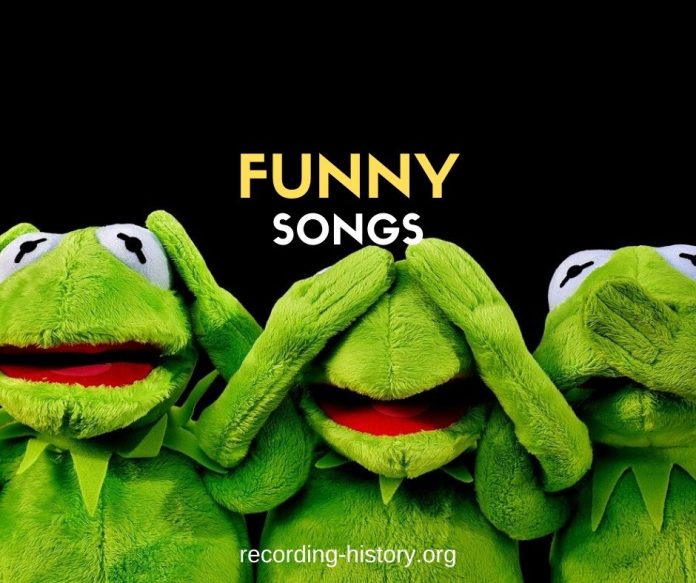 We all love humor and what great way to feel the comedic sense of laughter but through a song but a well-written catchy song. As this list consists of mainly three bands, we all know them for their comedy shows and their wacky songs. Let’s take a look at the top 20 Funny Songs.

One of the best rock songs we’ve ever heard was made by Ylvis as an ode to Jan Egeland, the head of United Nations. When they first sang this song in an arena, 25.000 people shouted Jan Egeland’s name, and Jan Egeland’s nephew texted him, “25.000 people in the stadium are chanting your name right now! ”

Started as an SNL short with the song “D*ck in a Box,” this collaborative work by Andy Samberg and Justin Timberlake continued by Lonely Island and generated two more sequels as “Motherlover” and “Threeway.”

An ode to Lady Gaga from Weird Al Yankovic. As critics stoned lady gaga for the way she performed she got this amazing support from Weird Al in a comedic way.

From Lonely Island, this amazingly funny song is an ode to one of the greatest memes of all time “Like A Boss.”

Another gem from Lonely Island about people who get aroused and “come” too fast for over everything. Song Itself is funny, but with the over the top acting of the trio with a secret cameo from Justin Timberlake, It becomes something more.

Made by Weird Al, this song is a mash-up between the idea of “you should know your grammar” and the 2013 hit single “Blurred Lines.”

From Ylvis, this song is about a very wealthy man who has everything, but his mind is inescapably stuck on the mystery of Stonehenge and how It was built.

From the one and only Alfred Matthew Yankovic, a.k.a. Weird Al Yankovic, this gem was a great hit when It first came out back in ’84. Merging the concept of “you should finish your plate” with Micheal Jackson’s great hit “Beat It,” It made us all crackdown with laughter.

From Lonely ısland came this gem in 2011. A band made of Jorma Taccone, Akiva Schaffer ve David Andrew Samberg trio. This was one of the many comedic songs made by them, and as the titles suggest, It is celebrating “just having sex.”

With over 900 billion views, this song was an international success for the Norwegian band and comedic duo known as Ylvis. Very talented brothers Vegard and Bard Ylvisaker wrote this song, and It made It all the way up to number six on the charts. Dabbling on the idea of the sound of the fox, this funny and catchy song will stay with us years to come.

It would be really mean to attach a link here that doesn’t have the lyrics so you can sing along:

Not only the song is funny, the plot twist in the music is too!

Perfect for your Instagram story and well as the song says, for a selfie:

As much as the haters want to hate, the song is still relevant in 2020:

No one, literally no one can pull of that much bling in one video, click here for the trippy Earth, Wind & Fire video of September:

It’s March 2020, and we are all still trying to find a fox translator to interpret what the Fox actually said, click below for a challenge:

A song that will never get old, thanks to not only the movie, the Inner Circle group has created what we now know as one of the best movie singles ever released with each movie release inspiring a new artist to sample the track. Click below for the original:

Shaggy would have been of great use to some of wanting to escape work as soon as possible. With the unlimited resource and the great advice he gives, Shaggy seems like just the guy for dependency:

A step by step choreography for the dance routine is uploaded on YouTube. With the current quarantine life, it might be the new party trick, this however is just a link of Vanilla Ice filling in the lines with pink paint spray:

If you have never used this as an entrance for your dinner parties, then you’re really behind with the times, duh!