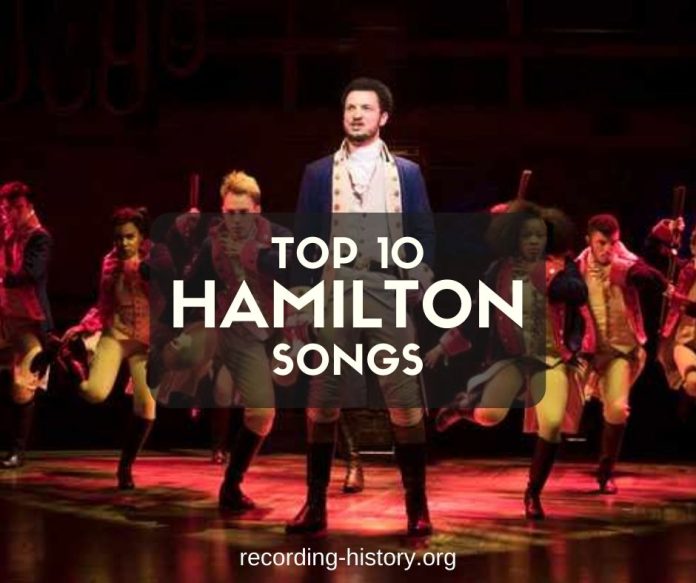 Hamilton is originated from the book of Lin-Manuel Miranda with the same name. It is inspired by the life of Alexander Hamilton, who is one of the American founding fathers who established the US government.

The film of Hamilton will be in theaters in 2021; you can also check the Official Spotify list. The musical is consistent with R&B, Hip-Hop, soul, and traditional Show songs. To learn more about the best songs from the show, scroll down for the top ten songs of the Hamilton Musical!

There is a short scene before “Non-Stop” that is very important for his part, Hamilton and Eliza receive a letter notifying them of the death of John Laurens. Following Hamilton says that he has so much work to do. Then cue Non-Stop.

King George sends a post to the colonist to show his condolences and assert his authority.

This song is about who Hamilton is and where he came from. It is a solid intro.

At the beginning of the song, sisters are watching the workers as they are men during the revolution; however, at the end of the song. Also, the revolution they are also working; therefore, the work is not only associated with men.

#6 The Room Where It Happens

The Room Where It Happens is a song about the Compromise of 1790. Also known as Dinner Table Bargain, we see Burr reacting and singing to the news of this event.

Guns and Ship is a fantastic song. It has a reputation of being the fastest song on a Broadway show, and the Hamilton play Itself is also the fastest-paced production ever to be released.

This is a fascinating song. As Aaron Burr sings, the whole cast who were dancing throughout the play sits and waits. Supporting the idea behind the title.

This song is very innovative, and It supports a great theme in Hamilton’s play, which being that what we understand from an event depends on who’s telling us the story.

In this song, Hamilton joins the movement against the British regime.

#1. Yorktown (The World Turned Upside Down)

This song tells us the events that happened during the Battle of Yorktown, also known as the last great battle of the revolutionary war.