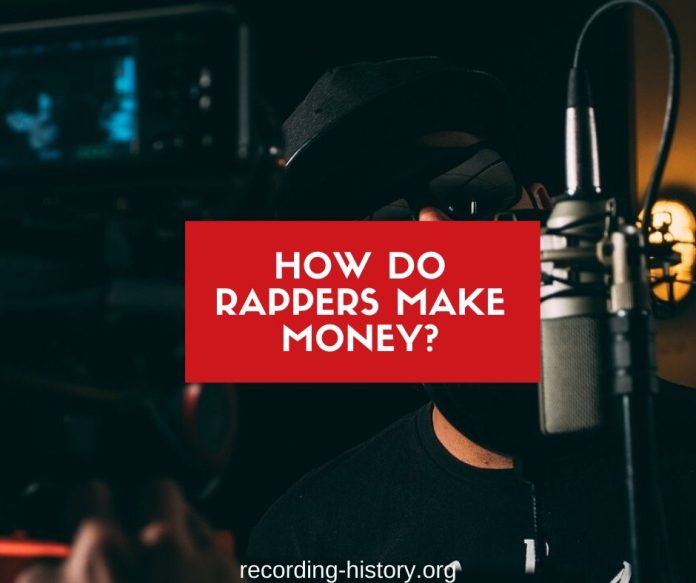 The world is a witness to how rappers like Tupac, Eminem and 50 Cent, among others changed how we view rapping as just music into a growing subculture of free-willed musicians who spew truth and commentaries about the society without fear.

The new generation of rappers may have diversified topics of interest and have joined the world of glamour, fashion and fame but it remains clear that their influence come from the message they rap out.

Present day rappers or hip hop artists as they are so fondly called now like Drake, Snoop Dogg, Travis Scott, Jay Z and Kanye West and their lavish lives have got us into thinking, how do rappers make money?

How do rappers make money?

There are many ways for rappers to make money if they stick with rapping alone but the basic principle here is that different rules apply to different set-ups. Basically, in rapping alone, rappers make money from the number of album units they sell, the volume of merchandise they sell, the number of streams they get, and of course, touring. You have to take note however, that there is no standard pay for all rappers because there is a great income disparity for independent rappers and signed rappers.

Signed rappers, who are taken care of by production companies can sell hundreds of thousands of album units, merchandise, streams and are on the road often for tours. For example, Travis Scott made $65M on the first leg of his Astroworld alone. Compare that to the album units sold by a newbie rapper or an independent one who could not sell album units beyond $10. It is not hard to the Math right?

Outside record sales, rappers engage in more lucrative businesses. Drake and Travis for example, have collaborated with Nike and now have their own sneakers series. Kanye West, as we all now, started his own shoe line called Yeezy.

Snoop Dogg invested in a company that sells and distributes weed for medical use. Aside from putting up their own production labels, clothing companies and others, rappers also make money when their songs are streamed in digital sites, when they are used in films, commercials, when they get endorsements and when they have public appearances.

As promising as the figures could be when calculated, rappers do not keep them all. They have staff, they give hefty percentages to their labels. And the only way you can really get more than 10% of your entire gross for the music you do is when you own your brand and production company.

What is the average salary of rappers?

This is an interesting thought and although we have already mentioned that it is hard to compute how much a rapper makes, a site called Simply Hired tries to provide an average annual salary for rappers which is at $62,000. The site used a simple mean computation by lining up the annual earnings of the lowest paid and highest paid rappers whose net worth is available on the internet.

Do rappers really earn a lot from streaming apps like Apple Music or Spotify?

Believe it or not, there have been debates over this because the rate these streaming apps place over songs regardless if the artist is famous or not feels like musicians are just giving away their music for free. Aside from this, the rule of percentages does not change.

Therefore, the meager amount that they get from the number of streams they have will be divided on a 70-30 basis. The 70% of what they make will be divided to the streaming apps and record label and only the 30% will go to the artist. In 2017, one stream is paid $0.0084 only. Thus, an artist must achieve more than six million streams to really make good money out of these streaming apps.

With all of these, you might want to know who the top three highest paid rappers in the world (in 2019) are.

The rappers at the first and second spot (who by the way, have achieved billionaire status) are not surprising at all since they have been grappling at those ranks for more than five years now.

In the last quarter of 2019, Kanye West closed a three billion earning with $1.50B coming from shoe line Yeezy. He is followed by Jay Z, who individually has a net worth of $1B coming from his own production companies, shares in sports franchises and line of bars.

The third spot goes to P Diddy who served as a mentor for many aspiring rappers who now share the stage of fame, fortune and glory with him. He was listed to have a net worth of $885M in the last quarter of 2019. The cash does not come from record selling alone but through his diversified investments in perfumes and fragrances company, a vodka company and a clothing and fashion company.

In conclusion, it is revealed that rappers have expanded their influence outside music. As  a matter of fact, it is shown that the business outside music is more lucrative for making money and in elevating influence and status. While we will always know them as the good rappers they are, there are layered lives outside their music and that is why we are sure that they are here to stay.