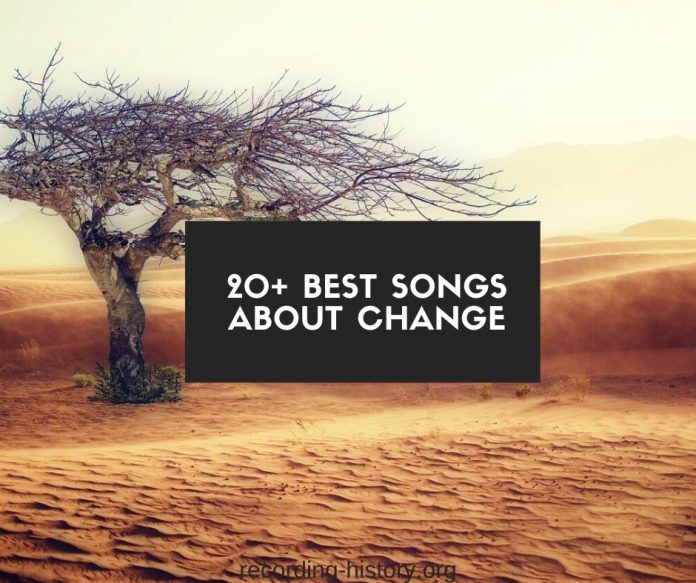 Change can mean a lot of things to many people. At the rate of how things are happening in the world right now, change can mean social transformation but it could also mean changing to be a better person.

It could also symbolize breaking free from routines of life that we thought were helping us or could be just growing up and being adults.

Whatever change means to you, here are some songs about change that will make you think, feel and just laid back chill.

1. Castle on the Hill (Ed Sheeran)

It is a coming of age song where the narrator became a famous star and he is coming back for the first time to pay homage to his town who made him dream and to just spend time in nostalgia and think about how friends grew up together but apart.

This song is a mainstay in the list of empowerment songs through the years. It calls for emancipation through history, knowledge and resistance to the enslaving pull of power and colonization.

This is about coming home after many years and finding out how friends, family and places have changed and you are the only one stuck in the memories of how they used to be compelling you to understand that you have to change too because everybody’s changing.

This duet by Lea Michele and Chris Colfer talks about breaking from the society’s mold of what is good for you and what is not. It is about breaking free from the perceived ceiling or limit imposed by society and that we could be the people we want to become regardless of what people say.

Queen B’s performance of this song in 2011 at the UN in itself was already powerful but as a song, it is a call to action that we must not waste our time in things that will further only self-interest but to walk the walk of the persecuted and to be one with humanity because that is how we leave a mark in this world.

This is a heartbreaking song of asking someone to stay and proposing that they just allow change to happen and that they just grow without giving up on each other.

It talks about how people change dramatically and the people we met when we were younger, the people we bullied before and how they turned their lives around is the biggest clapback we will ever encounter.

It is a coming of age song of how people change and while it could be daunting at first, the changes we go through will make sense in the end.

You might have heard it on the movie New Year’s Eve and if you truly digest the meaning of the song, it talks about hope that together, if we move past our differences and social constructs, the world could change and we could all begin again.

While it is easy to say that this is a song of regret, it is also a song of not being adaptive to change, hence, allowing things to fall apart. It talks of a man who now understood that he lost the person he loved because he was too caught up with the changes in his life, leaving him wanting her back through this apology song.

This classic is an anthem on how things could dramatically change in a minute. A few lines from it already gives the realization that we have to treasure the things and people we love before they change and we lose our chance.

Written at a time when racism and marginalization of people of color was too strong in America, this song was never shunned of relevance as we find that nothing has changed and standing up for things to change is but imperative even in this modern time.

This song is a tribute to Big Sean’s grandmother who was not only his biggest fan and inspiration but also one of the first black female captains during the World War II and who came home after the war with a Master’s degree and a Detroit police captain until retirement.

14. Man in the Mirror (Michael Jackson)

With snippets of the MLK’s speech, this song is about being self-conscious about wielding up power to make change happen in the world. It tells us that we coexist in one society and that we have to be better global citizens.

15. Waiting on the World to Change (John Mayer)

Released in 2006, this song is a social commentary on how frustrating it is to be branded as a generation who is doing nothing to change the world. In the last verses of the song, John sings a call of action for this generation that it is time to take up space and be out there to change the unfair system of the world.

16. What About Now (Chris Daughtry)

This song is powerful because it is a conversation with God and how we could find redemption when we take the bold step to be there for the homeless, the hungry, the hurting.

This has got to be one of the most influential songs of social change. It was first sung in the last stretch of the Vietnam War, picturing a society where guns are laid down to make way for humanity and brotherhood.

This is also a song of co-existence and global unity saying that we have to let the one love that made us stop all the killings and injustice for our children, for us, for the world and for God.

In 2012, this hip-hop song was one of the official anthems of gender equality and same-sex marriage across the world. It was played in mass protests and in lobbying equal gender rights and to flush out homophobia and hate speech.

This one is an anthem for women empowerment. It talks about all the beautiful things about womanhood and how as a gender, is one of the most important untapped sources of change for the world.

If there is one thing that we could learn from this list of songs about change, it is that change is beautiful and powerful. We could only thank our lucky stars that we could change and that it is the only constant thing in the world because we could look forward to things that have not happened yet. And oh, guess these songs could land on your playlist from now on right?