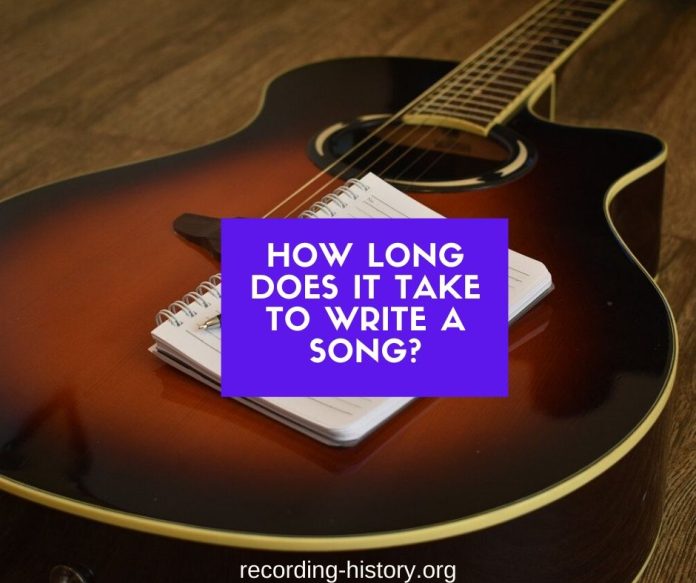 Cliché as it may seem, but in this content-based age, you do not need to become a professional songwriter before you could produce a hit song.

Have you ever wondered how long does it take to write a song? I mean, Taylor Swift releases an album once a year. Ed Sheeran literally gets off the hook and be found nowhere when he is working on his original songs.

YouTubers and content-makers on the other hand seem to upload newly written songs every week. So how long does it really take for someone to write a song?

How long does it take to write a song?

If you are looking for specific figures to answer this question, you won’t get any because there is no definite number of minutes, hours or days that would rightfully answer this.

Let us get this straight. It only took Eric Clapton seven minutes to write Wonderful Tonight for his wife as she was dressing up for a party they will both attend.

But technically, the verses of a song may take some time to be finalized. Good for Eric or Bob because they had the right words come rushing in at the right time. Cohen might have needed a little nudge of inspiration to make a song that iconic. But according to a site called Career Research, on average, a professional songwriter must work more than eight hours a day to finish a song.

What does ‘finishing a song’ mean in songwriting?

In songwriting, finishing a song means two things. There are songwriters whose expertise would be coming up with the words only. Remember the issue on One Direction and Ed Sheeran? It was spilled that Ed came up with the entire lyrics but his job was to only come up with that and it is the boys of 1D that came up with the music and tempo so all is good.

On the other hand, finishing a song in songwriting also means that you deliver the whole package. This means that you came up with the entire lyrics, underwent trial and error for the right notes and tempo, branded the song with a title and played it by yourself. This definition of finishing a song is anent to the works of Taylor Swift, Adele, Maroon 5 and many established bands and artists.

Finishing a song like this is also the way newbie artists engage people through YouTube about their music for a potential start in a musical career. This is what happened to overnight sensations like Justin Bieber, Shawn Mendez, James Bay, Carly Rae Jepsen and many more.

How do songwriters make money?

As far as earning money in songwriting is concerned, there are three ways to do that.

First, you could earn money through two types of licensing; sync and mechanical. Sync licensing starts when you enlist in a music library.

This virtual music library licenses songs that are used in films, advertisements and on TV. You will get paid every time your song is played. Different rates will be applied if the whole song is used or only a part of it.

Mechanical licensing on the other hand is basically selling your song on a global market through virtual music marketplaces like Rocket Songs. It is quite a risk though because some marketplaces do not allow you to retain ownership of your own song.

Second, there is what we call the record and distribute scheme. This is how overnight media sensations get noticed. So they record and upload their work, post it on YouTube with a shareable link. It goes viral, get streamed in apps and then you get paid. Lastly, you can make money out of songwriting by publishing deals. You can hire liaison officers for you, legal counsels and a manager to do the deal. This is often the scheme for already established songwriters.

More than the artists who render the essence and meaning of the song, the heart and soul of a musical masterpiece is often the underrated songwriter.

Artists and bands who write their own songs, in this case, always have the leverage because they own everything about the song, making the entire piece hit you on a soul-level because it is so personal for the artist. Nonetheless, songwriting is an interesting field because it could start as a hobby turned into a career or a career that is also a talent or hobby and we can all be songwriters at any time and any age.