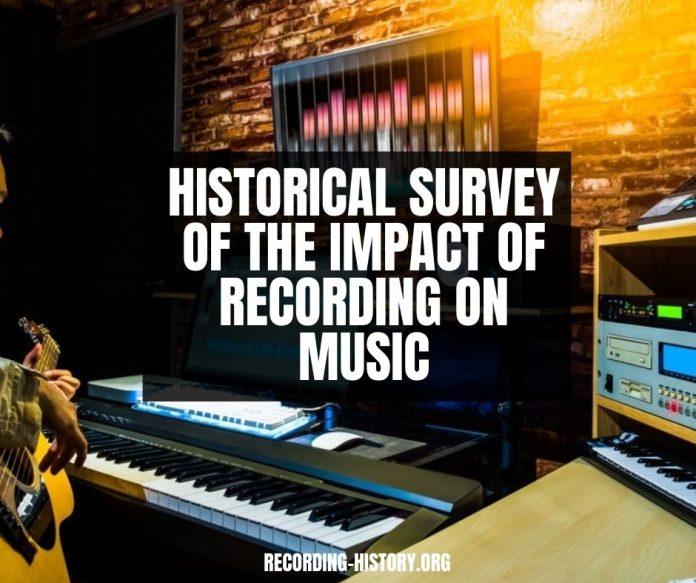 Are you an artist or a musical fanatic? If you fall in any of the categories, you are probably what a sound engineer has done in the music industry. As a music listener and a fan, what you normally believe in is hearing professional musicians nurturing their art through your speaker and over the radio.

Today, much contemporary music, ranging from pop, R&B, acid jazz to orchestral film scores, has gone through modernization, thanks to several inventions. The music recording industry has taken on other new forms.  Music recording has transformed into the digital world.

As a result, studios nowadays don’t require highly skilled professional musicians to back up their tunes. Musicians were quite expensive back then, prompting other methods to be created to save on cost. However, the lack of musicians in studios couldn’t stop producing high quality, which looks similar to the missing instrumentalists.

Before advancements in technology, music was produced in three major ways: mechanical, electrical, and acoustic. In mechanical reproduction, an automatic instrument plays music that the designer programs into the mechanism. Then the apparatus produces the resulting sound.

The first method was playing piano, which controlled a stream of air-activated in the piano’s hammers through the perforated cardboard roll. With this method, pianists were able to record their performances to playback in the future. The second invention was that of a phonograph by Thomas Edison.

Influence of Recording on Music

In 1967, many music composers loved the idea of recording their works instead of printed publications and live performances. With recordings, music composers gained familiarity with the music of others and learned much about their music works.

Recorded music was also used in teaching. This was done through the phonograph, which was used to teach both students and laymen who were serious with their studies. Teachers who found it hard to illustrate musical examples using piano were relieved by records to demonstrate their work. They could also use phonographs to bring the orchestras into the classroom.

Come the year 1930, a survey done by the Columbia History of Music by Ear and Eye indicated that phonographic surveys were very popular in music history classes, enabling students and their teachers to hear musical instruments for the first time. Such musical instruments include lutes, viols, clavichords, virginals, and harpsichords.

Then in the 20th century, universities, colleges, conservatories, and some secondary schools constructed recording studios to enable students to analyze their performances. Then came musicology, which involves the study of the music relationships between Western and Non-Western.

Musicology heavily relied on disc and tape recordings. The invention of photographic tools in the 18th century saw an improvement in music recordings. Some music in non-Western was transmitted orally instead of written tradition, and its practices were done in rhythm and intonation.

After the Second World War, anthropologists and musicologists visited the most remote areas to record aboriginal music through tape machines before being wiped out by Western civilization. Also, with the recording came the record producer. The record producer would play an equal role with musicians besides being in total command for the entire recording.

The producer would then use the sounds produced by musicians as raw material for their production. In the past, music producers would cut down longtime songs that could go on uncounted verses on live performance and then reduce them to short verses. However, that’s not the case today. With improved technology, longer recordings are quite possible, leading to complete recordings that can be appealing to the mass.

Recorded music has not only impacted the music industry but has also put music culture on the tab. In previous years, advancements in record technology improved sound quality by capturing a true sound for instruments. Furthermore, changes in recording technology have altered the recording of music and even music production.

With the advancement in technology, there has been continuous development in the way people are distributing and listening to music. Digital innovations have greatly continued impacting when and how people listen to music.

The Watergate Tapes: How Nixon Did It