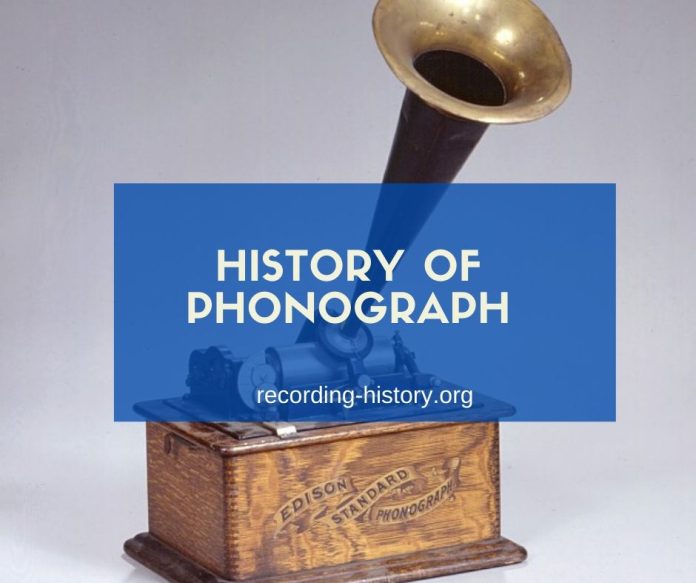 Have you ever come across any turntable? Well, if you have, then you’ve come across a phonograph. The phonograph is the modern prototype that we see today. The earliest phonograph only produces sound using tin foil sheets. A phonograph is a device that can record a sound, according to the two Greek words, which is the phone, meaning sound and graph, meaning writing to denote.

Thomas Edison invented the phonograph in 1877. The invention led to the introduction of modern turntables and record players and became Edison’s favorite invention because of the massive evolution and the modifications that Edison personally made.

The invention of the phonograph acted as a breakthrough from the previous invention of Edison, which was the telegraph and telephone. Phonographs saw the introduction of a machine that can transcribe telegraphs and can be used to send over more than once. From here, he speculated that the same system could be used for telephones.

Later, he used a diaphragm with an embossing point around the paraffin paper, which made the vibrations create waves, then came the first phonograph.

When was the Invention of the Phonograph?

There’s a controversy surrounding the invention year of the phonograph. This is because of its patent license a year later, hence eliciting mixed reactions on the exact year of the invention. However, timeline record players show that the phonograph was invented in 1877. And this is evident in the patent certificate and a Scientific American letter found in the archives of Charles Batchelor, who was Edison’s aide by then.

With its record, save, and playback features, phonograph became a very monumental feat. It had the same parts, such as the diaphragm, a hand crank, a groove, and a needle, just like the old gramophone. Within its cylinder, you can find the receiver and the diaphragm. The diaphragm is attached to the needle to enable the production of vibration sound.

Via the hand crank, the cylinder rotates, cutting into a groove to record sounds in the diaphragm. For playback, you can use a needle and an amplifier as a playback feature. The needle is then attached to the groove while setting up the cylinder to allow the playback. Music and sound are then played back using amplified vibrations.

What was the Importance of Phonograph?

Until this far, you don’t have to doubt the importance of the phonograph. Being the first portable, compact sound and music record, phonograph played a vital role. Without phonographs at that time, there would be no production of sound and music.

Also, there would be no commercialization of artists’ expression when it comes to their universal music if the phonograph never came into existence. Phonographs enabled the various artists to narrate the experiences, allowing them to express their artistic work. And what would the world look like without music?

Without phonograph, you would have never come across the modern sound and music formats and gadgets such as turntables, iPods, and digital formats that we know today. Other features developed with the phonograph invention include record players and online music streaming applications, including Spotify and Mp3.

The Fall of Phonograph

Yes, when did people stop using phonographs? Phonographs faced many challenges along the way, and one of them was competition from other inventions. For instance, Alexander Bell came with a graphophone in 1880, which promised to be better than a phonograph, thanks to the marketing team who did a commendable job.

With the invention of phonographs, both the recording industry and the whole music industry became very popular. After the world came from the devastation of wars and the post-industrial revolution, music became very important in promoting culture and reconstruction. There were changes in personal entertainment since the invention of the phonograph. People now have a device where they record and playback their favorite music anytime and anywhere.