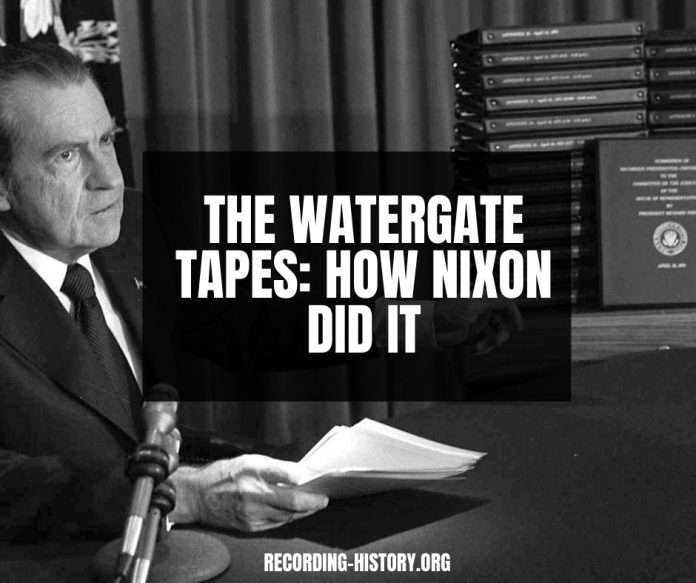 A 1974 judge John J. Sirica appointed a committee of six experts in audio technology to study one of the tape recordings made in 1972 by Richard M. Nixon. The tapes were being reviewed in connection to the Watergate scandal.

The tape in question was a recording of a conversation between Nixon and H. R. Haldeman taken in June, 1972. At a key passage, the voices on the tape became a buzzing, which persisted for approximately 18 1/2 minutes.

Supervised by United States Marshalls, the six experts (all prominent members of the Institute of Electrical and Electronics Engineers, or IEEE) concluded that the buzzing was the result of erasure, probably deliberate.

The original tape was produced on a Sony model 800B, but the magnetic signature of the erased passage was from a second machine, a Uher 5000. Both the Uher and the Sony were known to be owned by Nixon or his staff. While the panel did not go so far as to accuse anyone, it did mention that the Uher 5000 was a machine normally operated by Rose Mary Woods, Nixon’s secretary

These discoveries required over 200 man-hours of labor carried out in six different U.S. states. The IEEE experts used spectrum and waveform analyses and digital signal processing equipment (digital signal processing was an emerging technology at that time) in addition to visual inspection of magnetic patterns made visible by “washing” the tapes in a fluid containing ferrite particles (which align themselves to the patterns).

A summary of the panel’s findings can be found in the April, 1974 issue of the IEEE Spectrum, p. 24.

The original Watergate tapes were eventually transferred to the U.S. National archives, where they reside today. In May of 2003, History News Network reported that the National Arhives had once again tried to recover the missing 18 1/2 minutes, but failed.

Historical Survey of the Impact of Recording on Music