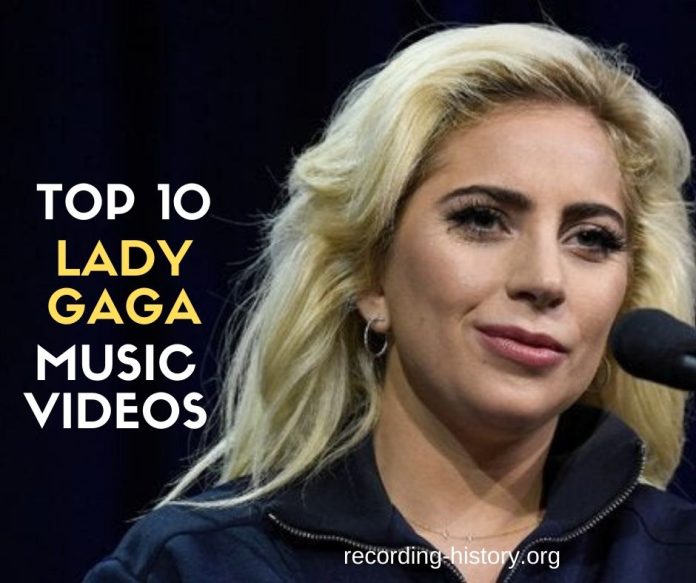 Being one of the most creative music performers in the last decade, Lady Gaga needs no introduction. She has released many pop hits in her recording life so far, and they are usually accompanied by a well-made spectacle of a music video.

The following contains a subjective list of Lady Gaga’s music video productions that each add a little flavor to popular songs. Although A Star is Born deserves to be high on the list of the best Gaga songs in general, it has been omitted here, as the video consists of scenes from the motion picture.

Released in 2010 as a third single from The Fame Monster, it was co-written and co-produced by the artist herself. The video includes some strong imagery. Some people detect apparent Madonna influences. Others focus on the inspiration from pop acts like ABBA or Ace of Base.

Set on a city sidewalk and fire escape, this one stands out from the usual concept of a pop song video. A minimalist setting, where Gaga dances alone to the saxophone music, seems like a nice change from more typical choreography.

The last single of her first album The Fame, released in 2009, this seven-minute clip looks more like a mini-movie. Especially given the presence of the actor Alexander Skarsgård, who helped Gaga to tell a captivating story about love and revenge.

Inspired by her cheering fans supporting her in difficult times, it was a lead single from the 2013 album titled ARTPOP. The video is a reflection of the overall style of the album, which seems to be a new, elegant and artistic approach to making music.

Lady Gaga co-wrote this song for the 2015 documentary The Hunting Ground that premiered at Sundance Film Festival. She didn’t star in the video herself, which could be one of the most emotional she has ever made.

This song was recorded for Gaga’s second studio album. She directed the music video herself to make it more personal, as the scenes portray her struggling during her early artistic days.

This number will always be Gaga’s signature song. As for the epic sci-fi infused video, it is worth noticing that the artist wrote the whole story herself. It features some out of this world scenes and sends a bold message.

That is what happens when you put two strong personalities and fantastic performers together to make a hit song: you get a Grammy nomination for Best Pop Collaboration material and a dynamic duo on the screen. The nine and a half minute video features Gaga and Beyoncé at their best: lots of dance routines, memorable costumes, and an intriguing storyline.

Released as the second single from her debut album, this song became as popular as playing the game itself, which is a bold statement given the amount of traffic found on the best poker websites. Singing the famous expression is a lot of fun, and ‘P-p-p-p-poker face’ still represents one of the catchiest hooks in pop music. This early hit helped put the singer on a pedestal, and the video had a lot to do with establishing her unique style and fashion choices.

This video is a crowd pleaser and a fan favorite. It reached the one billion views mark on YouTube in 2019, and it’s Gaga’s most viewed clip to date. It first appeared as a single for a reissue of the first album, and the video was showcased at Alexander McQueen’s fashion show. He was responsible for the bold choice of wardrobe for the video, which included the famous armadillo shoes.