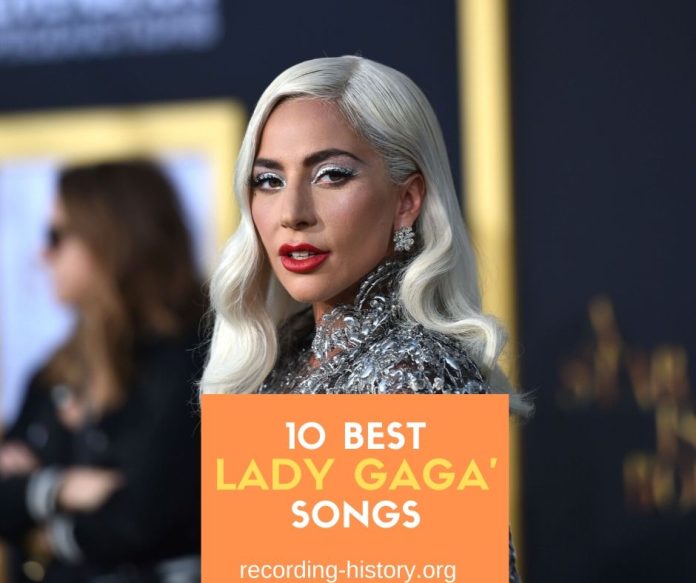 As she names the genre of her music as ArtPop, it is hard to disagree that Lady Gaga is one of the most popular and creative music makers of the last decade. Her unique and innovative style always made her a very sensational figure.

Everything she did made her a target for the arrows of criticism, but she always managed to use it for her advantage. She proves her stable position as a music-maker, the singer even as an actress from time to time. Recently, she has started to be named as “A star is born actress” owing to her good performance and jazz sounds in her latest movie. Let’s take a glance at the top ten songs of the Mother Monster!

Paparazzi is one of the songs from Gaga’s first album, “The Fame.” Besides the techno-pop, dance-pop sounds behind this song. It is also a critique of the paparazzi concept. During the time that the song was released, it was also a quite popular club hit.

This song is the anthem of Lady Gaga’s fans, monsters. The song has clear messages about accepting yourself as you are regardless of your ethnicity or sexual orientation. During the time that it was released, it was also very popular among the LGBTQI+ community.

With a very catchy sound, this song is one of the party-goers ‘ favorite songs of the time. She made a kick start to her career with that song and received very good criticism from the authorities.

Despite having very good critiques from music authorities, She also received a fair bit of reaction from certain religious communities as it refers to a Biblical storyline. It has an electro-house sound with the signature touch of Lady Gaga.

The song features American singer Beyoncé. It is like seeing a double rainbow. Or the clash of actual titans (except they work together!)

The song was produced and written by Gaga with a very catchy sound. It was inspired by the cheering of her fans during her performances. She felt like it was her turn to applause.

Gaga is gaga again, with her soldiers and her bold way of making her music. The sound is pop, and the video is fun to watch.

Best selling single of 2009 worldwide and one of the best selling videos of all time, Poker face made a quiet influence. It still feels fresh and fun to dance with.

The soundtrack of the blockbuster musical romantic drama of Lady Gaga and Bradley Cooper gets the spotlight off itself. The song also presents an important moment in the film. With the country like sound, Gaga proves that she can also do something quite different than her usual style.

The electro-pop/art-pop song brought Lady Gaga two Grammys. It is definitely an iconic song of the 2000s.