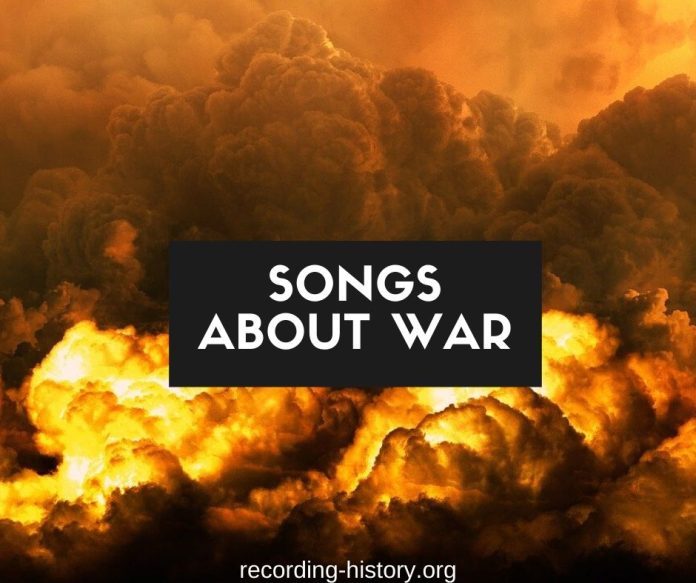 The threat of war has been a part of, and a catalyst to human civilization since history began. Here are 10 impressions of it in popular song.

War has been the subject of artist’s imaginations for thousands of years, from the epic poetry of Beowulf to the three-minute pop song. Perhaps this is because the threat of war has always inflamed extreme reactions – the celebration of the glory of war, or the feelings of devastation when war results in loss too great to bear.

War As Crime Against Humanity

In song, war is often not simply a conflict between nations, it’s a model for our own self-destructive tendencies as a species (“Eve of Destruction”). And in other cases, the effects of war are brought down to earth, with solidiers and their familes left as victims without any real reason for their sacrifices (“War”). Ultimately, war in these instances are a crime against everyone, and the agendas of war become absurd in the light of that crime.

War As A Reason to Protest

Because of the outrage that war has often inspires, the rise of the protest song isn’t too surprising. Some songs are from the point of view of those at home, waiting for loved ones to return (“Bring the Boys Home”). Others reflect the damage on that home front, when violence abroad begets violence at home (“Ohio”).

These pressures often lead those at home to question leaders, casting dispersions on their abilities to lead (“When the President Talks to God”). Sometimes, the anger is not about questioning leadership, but about consolidating a sense of national pride (“The Angry American”). In any case, war is a polarizing force, for good or ill .

War From A Soldier’s Point of View

War is a lonely and terrifying experience for the individual soldier too, often isolated by feelings of imminent doom and to die without meaning (“Casualties of War”). And at other times, war is less about fear from the soldier’s point of view, and more about that lack of meaning, and the realizations that being a soldier can reveal, such as the feeling that the enemy is not much different than they themselves are (“Day After Tomorrow”).

Because war is often put in terms of the fight of good against evil, many songwriters have expressed it that way in song. War as a crime against humanity is taken to its logical conclusion, and the end of the world or its salvation is what lies in the balance (“Showdown At Big Sky”). The prize that war is waged over often proves too costly (“Two Tribes”), and leaves the question of whether or not war is necessary, or whether it is ultimately absurd.

#5. When the President Talks to God – Bright Eyes

War has plagued and inspired humanity since civilization began, provoking a range of emotions from national pride to abject horror and disillusionment . As culture shifts its values to no longer see war as a chance for glory, and more as something to be avoided. And along the way, songwriters of protest songs and of songs that are concerned with the end of the world have traced that evolution. Maybe at some point in our history, songs about war won’t be needed at all.