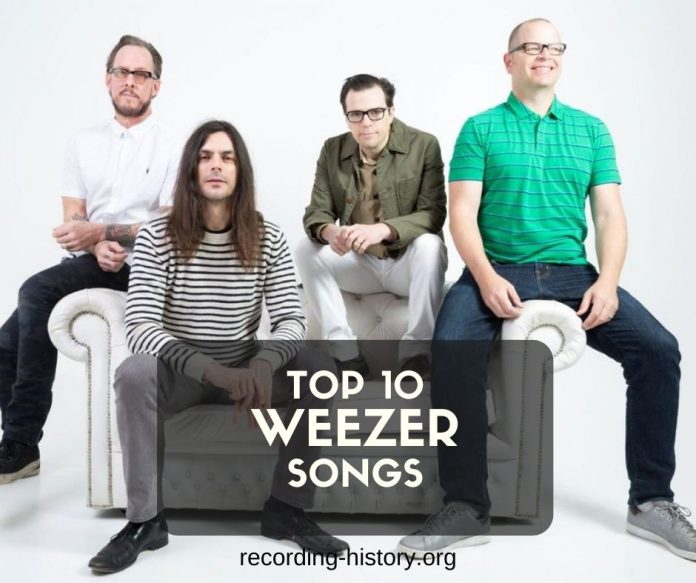 Their first album was self-titled; however, it is also known as a blue album. Let’s take a look at the top ten songs of the Weezer!

A-Ha cover was included in their album “The Teal Album” in 2019.

The song is one of the softest songs of the group. It brings a chill and laid back mood when you listen, like a feeling of a holiday.

The song was quite successful when it was released, and it quickly became very popular. The song is written like an inside talk and related to inner issues.

The song is about a homosexual, transgender sex worker. Because of the theme of the song, the record label didn’t want to use it as the first single; however, the band insisted on it.

The song is about losing it in a party where nobody minds. The inspiration of the song came to Cuomo’s mind in a lecture where they were discussing an anecdote of Einstein.

Contrary to the general knowledge, the song is about defending a friend. In the beginning, Cuomo was not sure about including this song to their album; however, in time, it became one of his favorites.

To Cuomo, the song is about the way he can live in Beverly Hills; however, he doesn’t think that he can fit the lifestyle there as it is an area known with the wealthy and popular people who live there.

Even new generations don’t agree, “Only in Dreams” is one of the fan-favorite songs of the Weezer. It is from the Blue album. The band still feels like the good old days.

Maybe because it has memories of Cuomo’s freshman years. The title of the song was influenced by the hot sauce of the fast-food chain Del Taco, “Del Scorcho,” which claims to be “over hot.”

The song is one of the most important songs of the decade. It has pieces from Cuomo’s childhood as his father had drinking problems. It is a very nice song that will remind everybody of the past and having a childhood in the ’90s.