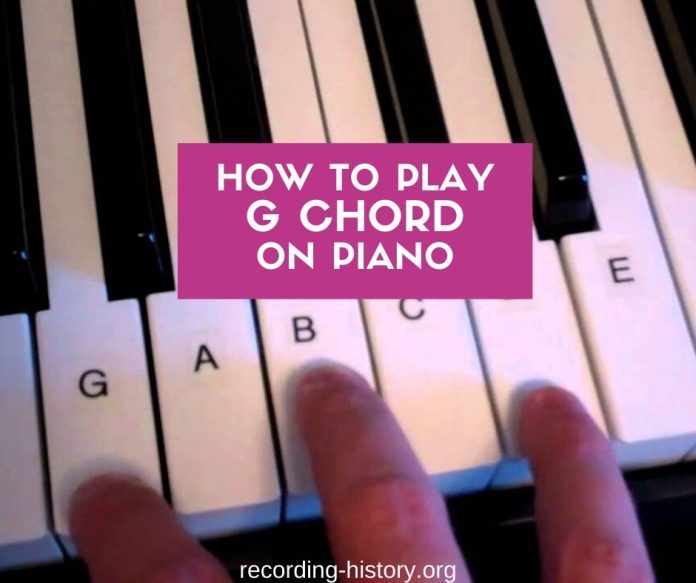 The G chord is one of the most common piano (and guitar) chords that you will find in many songs.

In piano, the G and C chords are the base chords that beginners learn to play and experiment on when it comes to piano sounds.

In this post, we will cover everything that you need to know about the G chord piano. These are very basic things like how to find it in the keyboard and what keys are involved in the G chord, so let us roll.

Related: How Long Does it Take to Learn Piano: A Comprehensive Guide

What is the G chord on piano?

The G chord on the piano is one of the easiest chords to master and play, hence, second to the C chord in terms of the first chords you could play. It is very simple and it only includes white keys.

All chords are played with three keys: the root, a major 3rd and a fifth perfect key. The G chord can be played by tapping on three keys only; G, B and D.

How to find the G chord

So we get it that the G chord is easy to play, but how do we locate it on the actual piano keyboard? Well, we already know that the keys behind a G chord are G, B and D.

The first step is locating where the G key is. Regardless of how many keys, pianos follow a 3-2-3 layout for black keys. The G key is the white key after the first black key in a set of three black keys.

In scale, the G major has six composite keys or pitches (G, A, B, C, D and F#). Thus, you play the G major using five keys and one black key.

To complete the G major, you need to go back and play the G key again.  Depending on the scale used, G major can be considered as high but it is never higher than F or C.

The G major is found in many acoustic songs. Artists like REM, Eagles, and even Billy Joel and Elton John have a lot of G major based songs and are very efficient for beginners who want to try other songs aside from G major nursery rhymes.

How to play G major chord on the piano

Piano chords like guitar chords are versatile and they can be played in more than one way but in each of these, you do not veer away from the root keys that make up a chord. In the case of the G chord, it is always within the G, B and D keys.

The G chord could be played in three ways: root position, first inversion and second inversion. Let us try to differentiate the three.

The root position is basically the classic G chord where you simultaneously play the G, B and D keys as shown in the image above. This is also where you could hear the lowest G chord sound.

If you want to practice the G chord on the piano, you can start with the songs Shallow (from the movie A Star is Born) or Cindy Lauper’s Girls Just Wanna Have Fun. These two songs rely so much on the G chord.

To conclude, the G chord, because it is very easy to play and master is found in many songs. It can be played in three ways; the root position and the first and second inversions.

The only difference among these three is the position of the root key (G), the 3rd major (B) and the fifth perfect key (D). And depending on the scale, you can play high and low registers of the G chord. All in all, the G chord is not that hard to understand. All you need to master is how the keys are positioned.