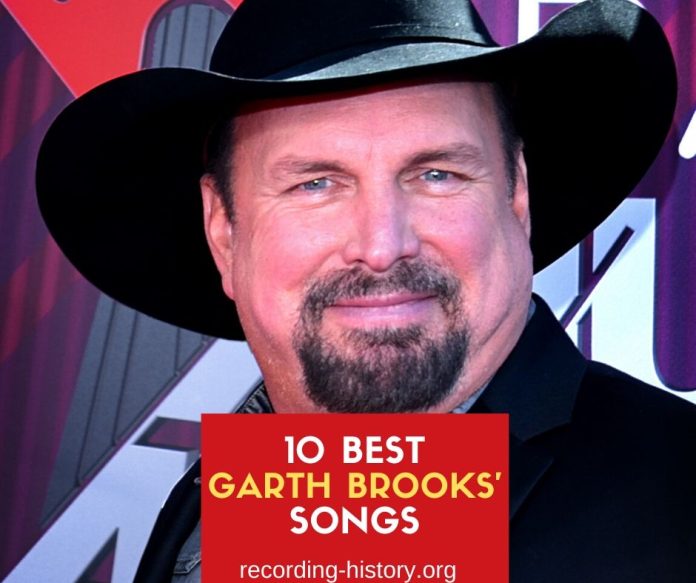 His father was an oil company draftsman, and his mother was a country singer from the 1950s, who recorded on the Capitol Records label. He graduated in 1984 with a degree in advertising.

Later in 1984, Brooks began his professional career in music. He was singing and playing guitar in clubs and bars in Oklahoma. His favorite music was rock, but after hearing the debut single “Unwound” by George Strait, he decided he was more interested in playing Country music.

One line references a “Chris LeDoux’s worn-out tape.” Chris LeDoux was a country singer who had toured for years but had never attained a major following. He was a big influence on Brooks, though. When that song became a success, LeDoux’s career revived.

Brooks wrote this urban anthem in response to the LA Riots in 1992, with Nashville songwriter Stephanie Davis.

A then little-known Brooks penned this song with Nashville songwriter Victoria Shaw, about pursuing one’s dreams. Released as the fifth single from Ropin ‘ the Wind in April 1992, it has been the ninth #1 hit by Brooks on the Billboard Country chart.

#7 More Than a Memory

This tale of heartache and pain debuted at #1 on the Billboard Hot Country Song charts in September 2007, the first song to do so in its history.

#6 Standing Outside the Fire

This song is about taking risks-risking life and not playing it safe because you’ll never know what you can do without taking chances.

Garth Brooks was struggling to be a songwriter. This song was written by him and Alger.

Brooks explained in The Garth Brooks Story that this song is based on a true tale about meeting what once was the girl of your dreams several years later.

This was named Favorite Country Single in the American Music Awards of 1991.

A crowd-pleaser is this ballad about a cowboy who shows up at an old flame’s engagement party or wedding reception. Brooks applies it to his acoustic guitar with a four-note arpeggio, which naturally brings roars of applause.

Brooks makes a point in this album, written by Tony Arata, that it is better not to know how things are going to end because if you do so, you might be depriving yourself of those experiences.