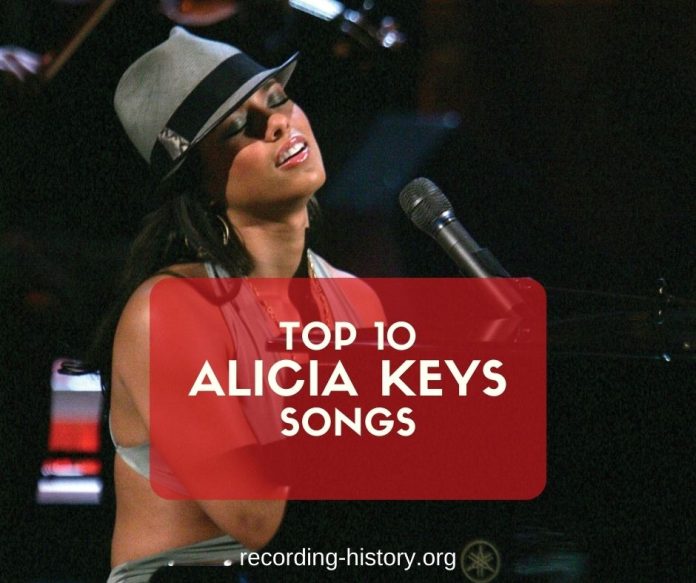 At the age of 16, Alicia Keys graduated from Professional Performing Arts Program in New York City and released her first album, which directly went to #1. She is known for writing and producing all her songs.

Her music puts together elements of R&B, hip hop, jazz, and classical music. When she was growing up, all these trends inspired her as she grew up in a poor region of NYC. She is known as an American singer, composer, and also actress.

She received many awards in her career with her timeless hits. Let’s take a look at the top ten songs of Alicia Keys!

The song won two awards in 2008 just after it was released. It is about living a love at the deepest and spending every minute like it is the last one.

The song brought a Grammy to Alicia Keys, and in an interview, Keys mentioned that it is her favorite song. It is such an inspiring song to be a superwoman!

This R&B, Hip-Hop hit, was co-written and produced by Kanye West. The song won a Grammy and Soul Train Music Award.

Keys wrote this soul and R&B ballad about self-esteem, and to be worthy of others ‘kindness. The song was also nominated for many awards and won an NAACP Image Award. Keys also performed this song in the 2002 Grammy Awards.

#5. Try Sleeping With A Broken Heart

The song creates an ’80s feel. It is a romantic, downtempo pop-R&B song. It also had a lot of good reviews from music authorities.

The song starts with a piece from Chopin. As she studied arts, she knows how to combine good music and classics. It was the first single from Keys when she was 20. It is about deep emotions to a special person.

The song is about the 9/11 attacks, which brought two Grammys to Keys. The inspiration for the song came when Aaliyah Dana Haughton passed away in a plane accident.

One of the most sung The Voice covers ever! The inspiration for the song came from the Hunger Games book while Keys was reading it. It was co-written and produced by Keys, Jeff Bhasker and Salaam Remi.

The song was co-written and co-produced by Alicia Keys’ rapper boyfriend. It was the most listened to song in the US in 2008 and won 2 awards. This is such an Alicia Keys classic and a timeless R&B hit!

Matthew - June 1, 2022
Are you a musician who is looking to get your music career off the ground? Following your passion for music can be...