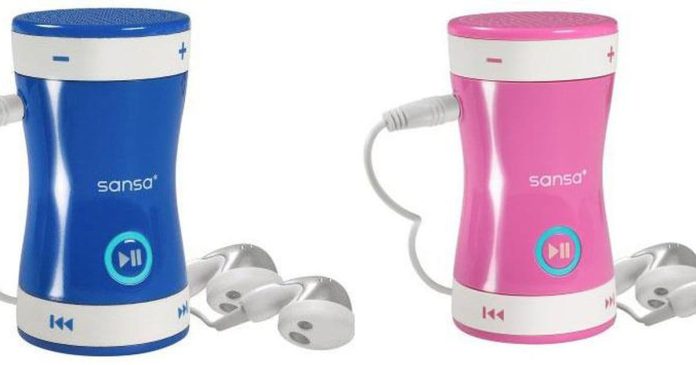 Expensive media players have competition in this affordable, sexy player for preteens and teens. Read a review and save a bundle.

Here’s a gift idea for 8-year-old-and-up kids in your life. Music is important to growing minds. The Shaker mp3 player from SanDisk is available in hot pink for girls, deep blue for boys and is a perfect alternative to pricey media players even the youngest of kids lust after.

Put less candy in those spring baskets you’re hiding. For the price of a few bags of chocolate, under $40 – you can slip in a palm sized, sturdy music player that’s simple to use and really adorable. While you’re at it, slip one in your purse or brief case. At this price, even if you lose it, drop it or decide to pass it along to a co-worker, it’s hardly a financial strain.

It weighs only a couple ounces and is shaped like an hourglass or a conga-type drum. The controls are in the base and top cap portion. The top swivels to control volume. All of the techno parts: USB connection, battery compartment and a slot for SD memory chips, are under a firmly attached cap on the bottom. Releasing that cap can be a bit frustrating, but it’s workable.

The player is either blue or pink with white banded trim and a “pewter” look belt clip. Very now. Coolest feature? Two jacks for ear buds so two kids can listen together. Nothing makes a cuter picture than two little girls groovin’ to their tunes together.

What’s in the SanDisk Package?

The player comes with a USB connecting cable to sync it with your PC and it has ear buds. One name-brand AAA battery and a SanDisk 1 Gigabit SD memory card (about 200 songs fit) are included. A mini-CD with product information is included, as well, and some players come preloaded with about five great single songs by popular artists. Unlike some items you’ve purchased for a child’s gift, only to find you’re missing things you really need to get up and running, this one is complete. Truly play and go. Assemble the battery and belt clip in about two minutes, click in the memory and let your child add the decorative stickers that come in the package. Voila – ready to rock.

This player won’t put the pod out of business, nor is it intended to. But it’s a decently made, nicely priced mp3 player that doesn’t do video, television or calender. It plays music. Inexpensively, quickly and easily. It’s instant gratification for young folks whose parents aren’t comfortable forking out mega bucks on demand for the latest and greatest fad. It’s new enough, slick enough, to become the latest status symbol in 8-year-old to high school cultures.