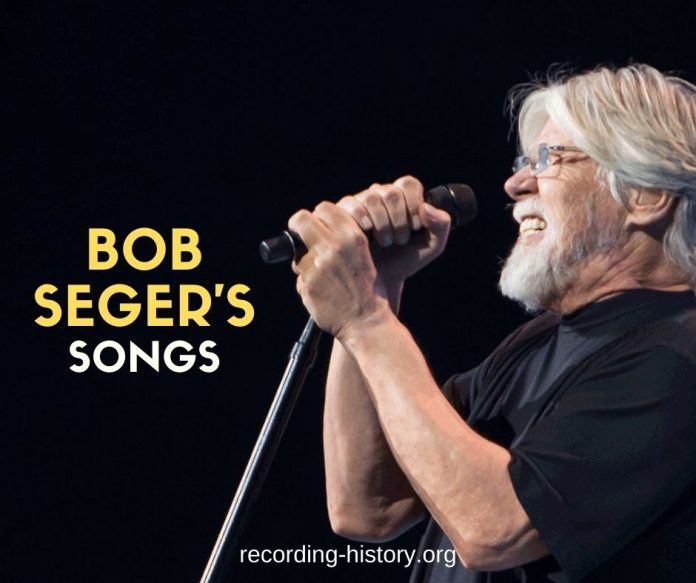 He liked James Brown more than the Beatles. He had a band in 11th grade, and played bars three nights a week. His destiny changed with cheers at the junior prom.

This song is one of four songs on the Stranger In Town album that Seger recorded with his Silver Bullet Band, which included bass player Chris Campbell and drummer David Teegarden. The other songs he recorded in Alabama using the musicians at Muscle Shoals Sound Studio.

The Fire Inside is about a lost partner and the singer’s internal journey and hardships.

Seger’s drummer, David Teegarden, recorded one pass to build the insistent rhythm on this album, then overdubbed a different pattern on top of it, and in the end, it sounds like two drummers are playing.

Like A Rock was a song that was so relatable to working-class Americans, the song was a hit immediately. Also, Seger was looking like a regular Joe than a rockstar, which was also working to his favor.

Mainstreet is about the high school years of Bob Seger. It explores the idea of youth and what comes with It. In addition, It is about the awakening from those years.

We’ve Got Tonight is about two people who’ve just met who aren’t exactly right for each other, but they’ll get by with just one night.

This is one of the few songs Seger recorded that he didn’t write. It was written by Jackson and Jones.

In 1980 this song got the award Best Rock Performance for Seger in Grammys.

Mostly known by the cover version from Metallica. This song deals with life on the road and musicians facing rigors while they’re touring. It shows the other aspect of success, which is not seen by the public eye -the isolation and aggravation.

This song is about a young couple losing their virginity in a Chevy’s back seat. Seger states the song is autobiographical, but he took some chances, but he took some liberties, as their tryst was after high school. The girl he was with had a boyfriend away in the army, and she married him when he came back, breaking Seger’s heart. Seger says the song reflects the years of high school independence and opportunity.