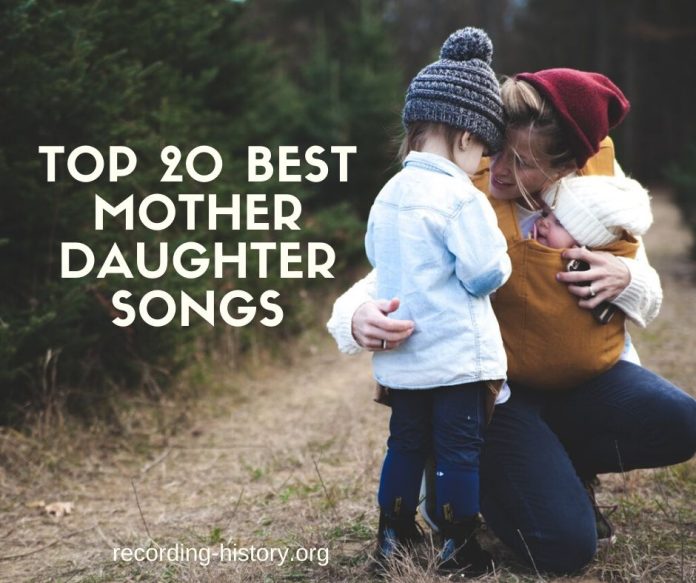 There is nothing more pure than a mother’s love and there is no purer bond than mother daughter bonds.

Daughters will become mothers some day and the brand of their motherhood shall always reflect the affection they established with their moms.

There is no better way to celebrate the bond between mothers and daughters than through songs and for starters, you can always start with these top 20 mother daughter songs of all time.

1. Because you loved me (Celine Dion)

This song won a Grammy, and was nominated for an Academy Award and a Golden Globe, all in one year, in 1996.

This song touches the soul especially when it is sung by a mother to her daughter, empowering her that everything is worth it and it is okay to make mistakes. It has been covered by more than twenty artists through the years.

3. In my daughter’s eyes (Martina McBride)

Hitting Billboard’s Hot 100 Chart in 2003, this country song captivates the mother-daughter bond with the vocals of a mother who will never falter because in her daughter’s eyes, she is a hero and hopes that one day, the daughter will always see how happy she has made her.

This maybe one of the most beautiful songs to sing in a daughter’s wedding. This talks about how this man your daughter is marrying is a good man and even though she’ll marry him, she will never leave you.

What better ode is there for a mother from a daughter than this song telling the world that she may not have saved anyone from a building fire but she will always be someone’s hero and that is to her daughter. It was released in 2005 under the country album Brave.

6. Wind beneath my wings (Bette Midler)

Like the first song in this list, this iconic song would really represent how daughters could not be the people they have always wanted to be if it was not for that one person who has constantly been pushing them to greater heights and that is their mother.

This song could pass as one of the best coming of age songs for parents to their children. Originally sung by Rod Stewart in 1988, this song won him a Grammy.

One line in the song particularly asks mothers to be good to their daughters because daughters will be like them as lovers and mothers. And with John’s vibrato and jazz-blues tone, it makes the line all the more convincing and powerful.

This song basically describes all the lengths a mother would go to just for her children; it doesn’t lie and it will make you dream and fly. It was released in 2010 under the album Intimacy.

The song was part of Adele’s historic comeback in 2015 under the album 25. It is literally her song to her daughter, having her at only 19, not being ready then but since her daughter came, motherhood has been her sweetest devotion.

This song is a part of her 2008 album Declaration and true to it, in this song, Ashanti declared her gratitude to her mom for not leaving her and for all the sacrifices she made just for her to get this far.

This song by Queen B was written for Blue Ivy, her eldest with Jay-Z, in her 2003 album called Beyonce. It talks about how motherhood made her feel alive and that if she could, she would wrap all her memories with Blue Ivy forever.

This is an empowerment song from a daughter to her mother whose father is a goner and an abuser. She tells her mom that they both got stronger with all the tears and vowed that he’ll never hurt them again.

This song might not directly talk about motherhood but being ready for the consequences of children getting older and you getting older too perfectly fit the mother image.

This is a beautiful country song of a mother telling her daughter that now that bedtime stories are gone, knowing that she raised her daughter well, makes her bittersweet of letting her go and grow one small Barbie bandaids at a time.

It might not also talk of motherhood but this sure fits because a mother’s love is a force that will always keep on lifting us up higher and higher. It was first performed in 1967 and won a Grammy Hall of Fame.

This one’s a shot to the heart as that folksy tone sings, “I hope that I love like you do, because I know that this world would be better if everyone had a mother like you.”  Heller wrote this when she became a first time mother in 2019.

This country song is a daughter’s tribute to her mom who led her by the hand and taught her everything she needed to know to grow up as a good person and for her to achieve all her dreams in life. It was released in 2017.

Inspired by the Hoda Kotb’s book of the same title, Kelly belts out how a pregnant mother is excited for her child’s birth and assuring her that even before things came to be, she has already loved her since forever.

This is an emotional country song performed by American Idol Season 10 grand winner, Lauren Alaina. It talks about how the judgments of society and all her imperfections are made perfect by her loving mother who sees her always as the best.

All is Found, Evan Rachel Wood

Blended Family (What You Do For Love), Alicia Keys feet A$AP Rocky

I Believe in You, Steven Curtis Chapman, 2004, Christian

I Will Be Here, Steven Curtis Chapman, 2003, Christian

Slipping Through My Fingers, ABBA, 1981, Pop

Sunrise, Sunset, Cast from Fiddler On The Roof, 1964, Broadway

They Can’t Take That Away from Me, Ella Fitzgerald, 1959, Jazz

Through The Years, Kenny Rogers, 1982, Country

Mothers and daughters will have the most cherished bond whether we admit it or not. They grow together, learn together, and pass on small family traditions to one another.

What better way is there to celebrate this bond and nurture it through time via nostalgia anytime, anywhere and in whatever occasion than to belt out songs about mothers and daughters.