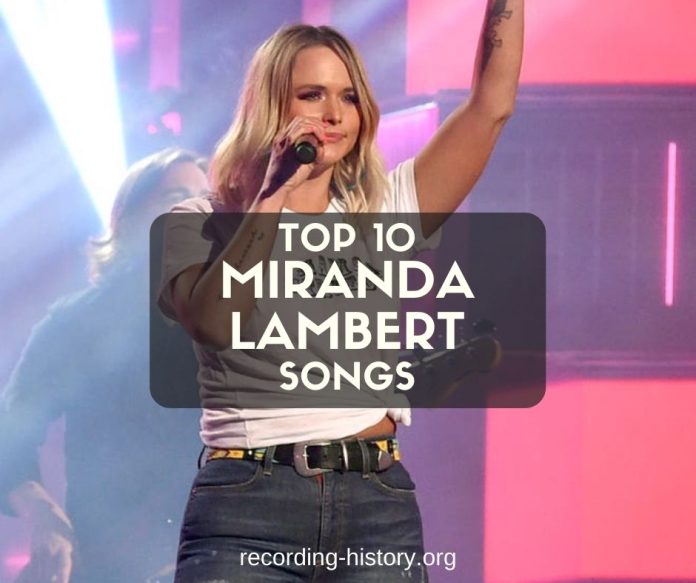 Miranda Leigh Lambert, aka Miranda Lambert, was born on the 10th of November in ’83. She is a country singer/songwriter from Texas USA. Miranda Lambert has a wide range of music collections with many different tales, from revenge fantasies to sensitive domestic life dreams.

She has a wide range of music collections with many different stories, from revenge fantasies to sensitive domestic life dreams. She is known for her hits like “The House That Built Me “and “Somethin’ Bad.” Let’s take a look at her top 10 songs.

This song is very bleak, and It is an ode to a hard life. It focuses on Lambert getting over heartbreak with drinking, music, and one-night stands.

This heavy, bluesy rock tune is a duet between Miranda Lambert and Carrie Underwood. The song became a number one hit on Billboard’s Hot Country Songs.

This great song was the second single from the third album of Miranda Lambert. The album “Revolution” won the Album of the Year award at the ACM 2010.

This was the third single from Lambert’s album from 2005. It was also the title song. She wrote the song, but she admitted that she unconsciously made It very similar to Steve Earle’s “I Feel All Right.”

This song won the ACM’s Single award in 2014. It was Miranda Lambert’s third win in this category.

This song is about the humble and poor lives of the South American youth. It’s an ode to the fact that you and only you can change your own fortune.

This song is about Blake Shelton’s older brother, who died in a car accident when Blake was only fourteen. Miranda Lambert says that Blake opened up one day, and they wrote the song together.

This song is written from the perspective of an abuse victim. The protagonist is sitting at home with a gun, waiting for her abusive husband to come home from jail.

This song is about the Tin Man from the Wizard of Oz. Tin Man is a character who seeks a heart in order to feel. Lambert is trying to convince him that organs are not that big of a deal.

#1. The House That Built Me

This Miranda Lambert’s first number one hit on Country billboards.