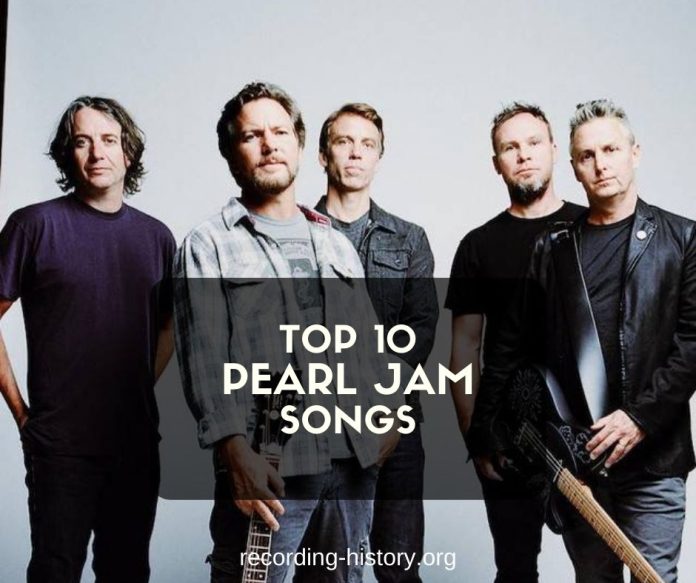 Pearl Jam is a famous American rock band that has sold over 85 million albums globally in its still-growing career.

This band is composed of Jeff Ament, Mike McCready, Stone Gossard, Eddie Vedder, and Matt Cameron; they are also the founding members of the band, Boom Gaspar has also been a member since 2002. With the band’s continuously rising success, let’s look at this stellar band’s top 10 songs.

This song was featured in the band’s 2002 album Riot Act, this peaked at number 6 on the US Billboard Modern Rock Tracks and was later included on the band’s 2004 greatest hits album.

This is also included on the band’s 2004 greatest hits album and peaked at number 17 on the US Billboard of Mainstream Rock Tracks chart. Touching vulnerable topics made fans jam to this hit.

Featured in the band’s album Vitalogy back in 1994, this song was a massive hit globally and it was also included on the band’s 2004 greatest-hits albums making.

This song topped both the US and Canadian charts and number two on the UK Rock Chart and top 10 in other countries which single-handedly became the band’s highest-charting single.

The song’s deep meaning and poignant feel made this loved by fans across the world earning the number 21 spot on the US Billboard of Mainstream Rock Tracks chart.

Fans call this the highlight of the band’s album Vitalogy despite the lack of advertisements of the song it reached the number 13 spot on the US Billboard Modern Rock Tracks chart.

This song made its way across renowned music charts internationally, fans loved its portrayal of the struggles of a father looking after his daughter, making this song sentimental and heartfelt.

Despite the lack of commercial release, this song reached the top of the US Billboard Mainstream Rock Tracks chart and stayed at the spot for 8 weeks.

One of the band’s biggest hits and a fan favorite.

One of the band’s masterpieces receiving gold certifications from Australia’s ARIA, Italy’s FIMI, and silver certified from UK’s BPI.